Of the many games rising in popularity right now, Valheim is the undisputed king of them all. In absolutely no time, the viking-themed survival sandbox game has become one of the top-rated games on Steam, no easy feat for any game.

As a result of the game’s social nature, many Discord servers based around the game have popped up over the past year. These allow players to congregate, discuss the game, form communities and of course, play the game together. It begs the question, what are the best Valheim Discord servers to join?

It can be an arduous task to filter through them all in hopes of finding the best ones. Thankfully, we’ve done most of the hard work for you. At Valheim Server Hosting, we’ve compiled six of the best Valheim Discord servers, all of which we’ve listed below along with their pros and features.

Simple Tips Before You Pick a Server

Now, before you go straight into joining a new server, we have some simple tips for how to pick one that suits you the best. After all, there’s nothing worse than joining a server and finding that you simply don’t fit in well with the community.

First, you’ll want to find a server that’s inviting new members, as some servers aren’t too keen on helping new recruits. You’ll also want to join an active server so you’ll actually have people to play the game with. Finally, always go for a server with a set of rules that stamps out toxicity.

If you’re a new player, you’ll also want to learn some basics as to how Valheim multiplayer works. Don’t worry though, we’ve got a guide on Valheim multiplayer to help you get started with ease. Now that you’ve got these in mind, let’s get into the list.

Valheim Global is one of the many growing Discord servers for the game, with some of the best players in it. With so many players, a slew of features and many advantages, it’s an excellent server to join for beginners and veterans alike. It’s also not too populated as of now, so there’s a strong sense of community in it.

On top of all these benefits, the Valheim Global Discord server also features a set of interactive tools. These make the interface and server a lot more intuitive, allowing for a lot of possibilities. It’s also constantly growing, so definitely keep it in mind if you’re looking for a fun growing community to enjoy the game with.

The Valheim Community server, like the previous listing, isn’t exactly one of the biggest Discord servers around. It’s sizable enough with almost 20,000 members, but it’s not breaking the 100k mark that the biggest servers do. Where it compensates for its shortcomings however is in a quality community that promotes player growth and is very supporting.

Valheim Community has built its base around being one of the friendliest and most active servers around, actively helping players promote their servers and helping newcomers find their footing with no negativity. It’s an excellent choice for players of any skill level.

With almost 170,000 members, the Valheim Official Discord server is massive, with a metric ton of members from all around the world. No matter what time of the day you visit, you’re always going to find a community member to befriend and play the game with. Because of its sheer size, there’s also a continuous stream of content, memes and fan-art, really allowing players to immerse themselves.

Surprisingly, Valheim Official manages to avoid toxicity quite well despite its huge number of members thanks to their strict set of rules. While some members may find the rules a bit too strict for their liking, there’s no denying they work, and it results in a high quality Discord server for every Valheim player around. A fantastic choice if you want to always have someone to play with.

TK Valheim – ICARUS is a very underrated Valheim server. It has a decent member count of just over 18,000 members, but what sets TK Valheim – ICARUS apart from its peers are its dedicated servers for all regions, active LFG and frequent tournaments, all of which add a lot to the game. Many players here are very active, with many of them delving deep into discussions surrounding the game.

As the self proclaimed “craziest Valheim Discord Server,” it also allows for a fair amount of other content. You can even contribute your own tournament ideas if you so wish, allowing you to really mesh with the community and make your mark. A severely underrated server that deserves to be seen more than it does, give it a chance and it will surprise you!

5. Army of the North 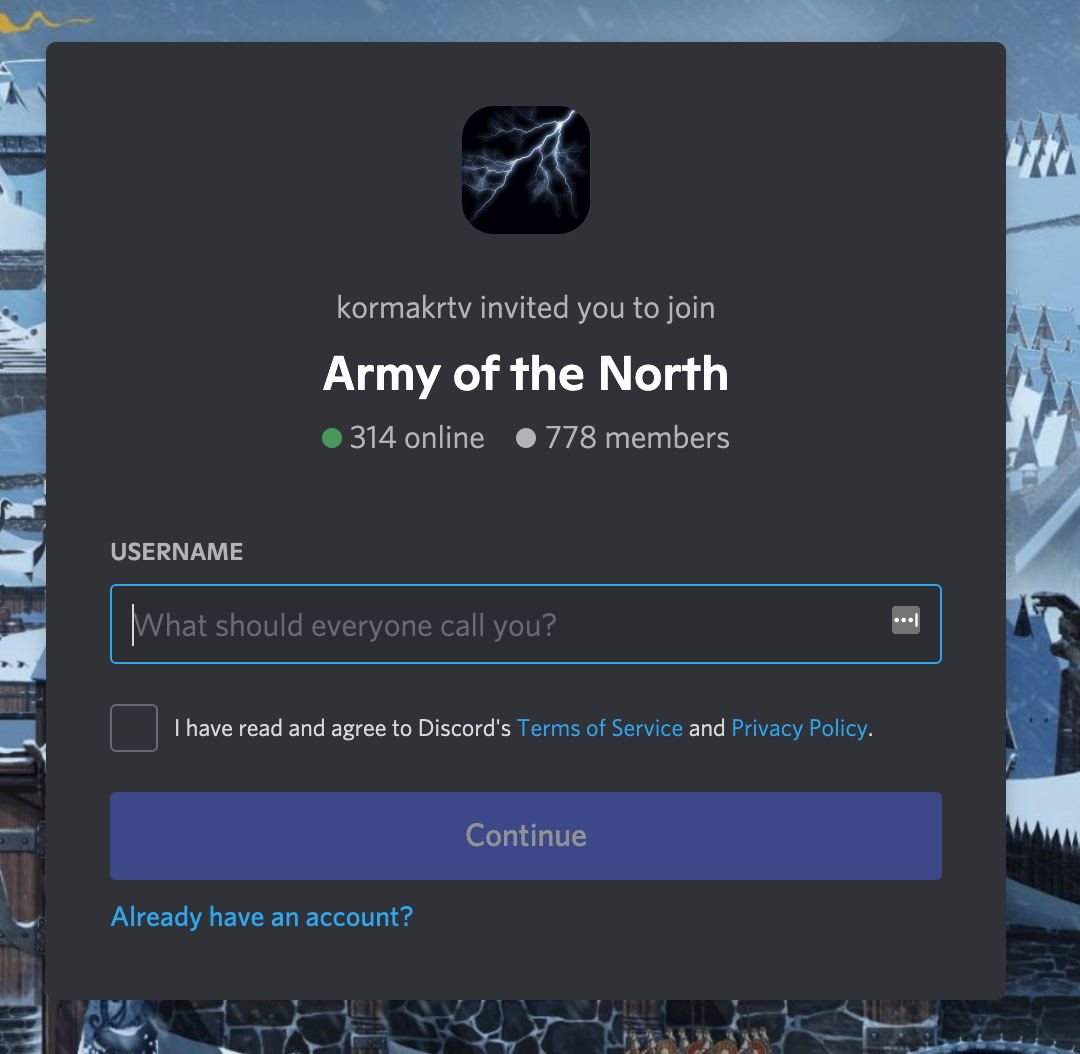 Army of the North is quite well-known among Valheim players as being the most hospitable Discord server available. Despite the fierce name, people on Army of the North are intensely friendly and supportive to members of all skill levels. Everyone is extremely welcoming, and it makes for a warm, caring environment.

If you’re a beginner, there is simply no better choice than Army of the North. With a strict set of rules and regulations, you’ll never face any form of bullying or criticism here, and you'll slowly and organically grow as a player without the pressure of matching up to members better than you.

Join Army of the North

Daddy is a bit different from the other Discord servers on this list because it’s not a dedicated Valheim-themed Discord server. That doesn’t make a lesser choice however, as the Valheim community on Daddy is massive. 237,000 members strong, it’s practically impossible to not find someone to play with on this Discord server. Where Daddy’s greatest strengths lie however are in its variety of content.

While they have dedicated channels for Valheim, you can also indulge in servers for many other games like Valorant, Among Us, League of Legends and Genshin Impact. On top of that, if you’re strictly a Valheim player, the community here is excellent and the slew of tools and features are almost unmatched by other servers.

Daddy also lays claim to some of the best support staff of any Discord server, and even features the ability to make private groups within the server in case you make some really close friends in it. Don’t let the size or name of the server intimidate you, it’s a great time.

While joining a Valheim Discord server is tempting, a great alternative is Valheim Server Hosting! It’s a relatively simple process, and we have an excellent guide for it on our website here! There are plenty of benefits to Valheim Server Hosting, among them being the ability to keep your own world, as well as privately play with your friends whenever you want.

Not only is it simple to set up, but we’ve also got helpful guides for anything related to Valheim Server Hosting, including how to choose the right server for you and fixing Valheim server lag, so we recommend you give it a shot.

So there you have, six of the best Valheim Discord servers available, all curated by yours truly. Every server here is a great choice, and no matter which one you go with you’re bound to be satisfied. Valheim is a social game, so it’s essential that you find a healthy community that fosters interest in the game, which we hope you’ll get to experience with the help of this list.

Of course, the most important thing no matter what is to have fun. Valheim is constantly growing, and no matter which server you join, always remember to enjoy the game.